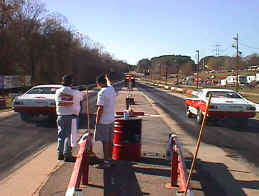 Greer Dragway is a 1/8th mile IHRA sanctioned dragstrip located near the city of Greer, South Carolina.  Nestled in the foothills of the Blue Ridge Mountains, Greer is located between Greenville and Spartanburg in the Northwestern part of the State.

The Greer Dragway was opened in the 1950's by the Greer Jaycees and was really a community project.  All labor used in getting the track started, built and running was done by the Jaycees, neighbors and several area groups of concerned citizens.

The original purpose was to provide money for needy children in the Greer, SC area.  Besides having races to raise money for the children, the Jaycees would, on holiday weekends, have fireworks and other entertainment for those children.

In the early 1970's the Jaycees were temporarily disbanded and the land was purchased by a realtor.  The land was later leased and bought by Tom and Sue Ferrell. Roland McAbee became the manager of the track in 1979.

On October 25, 1988, Roland McAbee passed away.  Mike Greer then became the new manager of the track.  Mike was the manager for over 20 years, and became the current owner in 2010.

After the last race of 2009, the old racing surface and metal guard rails were done away with.  Beginning in 2010 we have a brand new concrete track, walls and new timing equipment.